For Medicare skilled nursing facilities Learn about consolidated billing requirements on claims for Medicare Part A and B payments. Contact us at info@medicalbillersandcoders. com/ 888-357-3226. 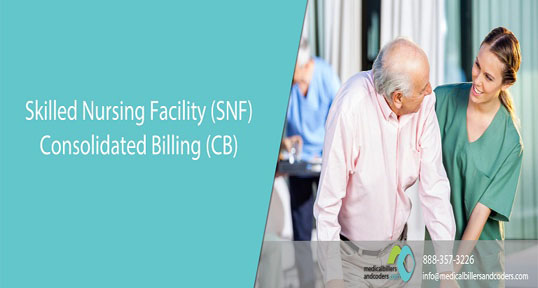 Prior to the Balanced Budget Act of 1997 (BBA), an SNF could elect to furnish services to a resident in a covered Part A stay, either: directly, using its own resources; through the SNF’s transfer agreement hospital; or under arrangements with an independent therapist (for physical, occupational, and speech therapy services). In each of these circumstances, the SNF billed Medicare Part A for the services.

However, the SNF also had the further option of “unbundling” a service altogether; that is, the SNF could permit an outside supplier to furnish the service directly to the resident, and the outside supplier would submit a bill to Medicare Part B, without any involvement of the SNF itself.  This practice created several problems, including the following:

Congress then enacted the Balanced Budget Act of 1997 (BBA), Public Law 105-33, Section 4432(b), and it contains a Consolidated Billing (CB) requirement for SNFs.  Under the CB requirement, an SNF itself must submit all Medicare claims for the services that its residents receive (except for specifically excluded services listed below).

CB eliminates the potential for duplicative billings for the same service to the Part A fiscal intermediary by the SNF and the Part B carrier by an outside supplier. It also enhances the SNF’s capacity to meet its existing responsibility to oversee and coordinate the total package of care that each of its residents receives.

If you want to read the complete blog then click below: Skilled Nursing Facility (SNF) Consolidated Billing (CB)

General Surgery Billing Alerts that determine your revenue cycle
Are you looking for a leading general surgery Billing Services Company? If, yes then your search ends here.

Declaration of Blanket Waivers for SNFs
In this blog, Our Medical Billers and Coders shared emergency declaration blanket waivers for certain providers in SNFs.

Hospitals are committed to Quality Service and Daycare for patients
In the era of the internet, hospital management is putting their focus on updating their existing system in developing daycare with other facilities.

Importance Of Pricing Transparency & Coordinated Care in Medical Facilities
Patients are getting more conscious when it comes to their rights in recent years. Patients are more likely to look for more economical solutions as they begin to face more of their healthcare bills.

LEDLightExpert Provides the Opportunity to Save 80% on Utility Bills with LED Retrofit Kits
In most homes and commercial houses, utility bills consume a lot on the budget. Understanding this,

Colorado Springs Counseling Centers - Why They Have Closed
He skills that they learned. from the programs offered at the agency that is now closed.

Indoor Shooting Range - Gets the Professional Look With an Indoor Shooting Range
When you want the best of both worlds, you will be able to find an indoor shooting range in Connecticut that can give you exactly what you need to hone your skills in no time.

How the Mental Health Center in Englewood Co Works
And employees of the facility. They offer a variety of health care insurance plans, and most offer financial assistance to help pay for the healthcare that is provided.
Business Service
Business details
MBC
We are the leading Medical Billing Services Outsourcing Company qualified and competent to address diverse medical specialties over 2 decades now in the USA.
×